Spanish and Swiss "justice" is catching a grandfather in a corruption case on an especially large scale. Soon, the rest of the "noble dons" will sit on the shonks. This is the best case for them (Oleg Nasobin)

The former king of Spain Juan Carlos found himself at the center of many scandals: journalists published recordings of his conversations with his former mistress, talked about large-scale financial fraud and money laundering. As a result, his reputation was destroyed - and now the very existence of the monarchy in the country, now headed by his son, King Felipe, is in question.

It seemed that Juan Carlos would go down in history as the king who ensured Spain`s successful transition to democracy after the end of Franco`s dictatorship in 1975. But when the personal financial affairs of the 82-year-old ex-monarch became the subject of two trials in Switzerland and Spain, his past merits faded into the background. The BBC reports.

How King Felipe fell into a trap

When Juan Carlos abdicated the throne in 2014 due to rumors about his scandalous personal life, his successor, King Felipe, tried to show that he was not like that at all. Unlike his grandfather, he wanted to personify moderation - especially given the fact that the monarchy is not very popular in Spain.

But Felipe was accused of allowing himself to live in luxury - and he did it at the expense of his father`s millions hidden in offshores. As a result, calls for more transparency in the financial affairs of the royal family have been renewed. The king is under pressure to sever ties with his father.

In the footsteps of royal money

In 2018, after allegations of Juan Carlos` secret millions appeared in the press, Swiss prosecutor Yves Bertossa launched an investigation. He interrogated the former king`s lawyer, who lived in Switzerland, his financial advisor and several other people associated with him, including his former lover, German entrepreneur Corinna zu Sayn-Wittgenstein.

Bertossa`s ongoing investigation centers on the $ 100 million that Juan Carlos received as a gift from the King of Saudi Arabia in 2008. The prosecutor is trying to find out whether the gift was related to a contract worth 6.7 billion euros, which Spanish companies received three years later for the construction of a high-speed railway between Mecca and Medina.

One of them, registered in Panama by the Lucum Foundation, was created specifically to receive a $ 100 million gift from the late King of Saudi Arabia Abdullah. In 2012, this company was liquidated, and almost all of this amount was transferred to Corinna zu Sayn-Wittgenstein.

Sain-Wittgenstein has a dedication signed by Juan Carlos, which is intended to demonstrate that she received these funds as a non-refundable gift and that there is no money laundering involved. At the same time, Sain-Wittgenstein claims to have returned the money she received from the Lucum Foundation in the form of a loan to buy two apartments in the Swiss resort of Villars for her and Juan Carlos.

The second fund is called Fondation Zagatka, it is registered in Liechtestein and its beneficiary is lvaro de Orleans, a distant cousin of Juan Carlos. In the course of his investigation, Bertossa interrogated de Orleans about the multimillion-dollar payments from foreign business transactions that appeared in the accounts of his foundation, as well as about the financing of Juan Carlos` private flights worth more than 5 million euros.

De Orleans claims that millions in the accounts of the Zagatka fund belong to him, and he helped the former king out of family feelings.

In June, prosecutors from the Spanish Supreme Court announced that, for the first time in the country`s modern history, an investigation into Juan Carlos was launched to determine whether he was guilty of crimes related to Saudi money. That said, Juan Carlos remains protected from prosecution for any violations committed prior to his abdication in 2014.

When did fortune stop smiling at Juan Carlos?

Hints and rumors about the king`s extravagant luxuries, his extramarital affairs, as well as the fact that he was involved in corrupt deals, often appeared during his reign. However, the Spanish media, like the political establishment, preferred to turn a blind eye to this until April 2012, when the monarch suffered a setback during his favorite pastime - hunting.

He was hunting at that moment not for a wild boar or deer somewhere in the Spanish forests, but for elephants in Botswana, and this at a time when unemployment in Spain exceeded 24%, and the country was experiencing the worst economic recession in all the time that Juan Carlos was on the throne.

During that ill-fated hunt, the king broke his hip, and when he had to be taken back to his homeland, all the details of his pleasure trip, which had previously been kept secret, were revealed.

Just shortly before that, another scandal broke out in which the king`s son-in-law, the husband of his youngest daughter, Iñaki Urdangarin, was involved. He was accused of fraud and corruption and ended up behind bars in 2018.

Soon the Spaniards learned that their king was in Botswana with his mistress, Sain-Wittgentstein, and the Saudi tycoon paid for the entire trip.

This, as well as health problems, forced the king to abdicate in favor of his son Felipe, who became the new king in June 2014.

But the worst for the newly-made "retired king" was ahead.

In 2018, the online edition El Español published a series of materials based on transcripts of taped conversations between the king`s ex-mistress Sain-Wittgenstein and Jose Villarejo, a former police investigator currently serving a prison term. Talking to him from her London home, Sain-Wittgenstein was unaware that Villarejo was in the habit of secretly recording his conversations with the powers that be.

In this conversation, which took place in 2015, Sayn-Wittgenstein describes how she was surprised by Juan Carlos` awkward attempts to launder money. She told how suddenly the monarch told her that the king of Morocco had just given her a property worth 3 million euros, but he asks her to donate the gift to him.

"They say - now, she does not want to give things back. But if I do that, it will be money laundering and I will go to jail," says Sayn-Wittgenstein on the tape.

In the same conversation, she claims that the Spanish special services have launched a campaign to intimidate and pressure her into a deal with the investigation.

"The king has no idea what is legal and what is not," said his former mistress in the same conversation.

These tapes led to the opening of two investigations - in Geneva and in the Spanish National Court. The Spanish investigation has since come under the control of the Supreme Court, since only this instance is competent to investigate the charges against the former king.

Further damage to the royal family

The millstones of justice are turning slowly, and they may never end up in the dock for Juan Carlos. However, the media went all out, starting to vying with each other to narrate about the luxurious lifestyle of the former monarch.

The Spanish newspaper El País, which traditionally supported Juan Carlos, told how he flew to Switzerland in 2010 to his personal asset manager and handed him a suitcase with $ 1.9 million in cash, saying that it was a gift from the ruler of Bahrain.

But perhaps the most painful for the Spanish monarchy as an institution was the March 2020 disclosure that Felipe had been designated as the heir to the Lucum and Zagatka Foundations, forcing the current king to declare that he would renounce any inheritance whatsoever. which Juan Carlos intends to leave to him by will.

The Spanish royal court was also forced to make an unprecedented announcement that Juan Carlos will no longer receive an annual payment of 200,000 euros from the country`s budget. Juan Carlos has not appeared in public since then.

How can events develop?

The former king of Spain is not immune from prosecution in Switzerland - regardless of the prescription of the offenses committed - so prosecutor Bertossa can still bring charges against him.

As for the investigation, which is being conducted by the Supreme Court of Spain, most experts believe that the ex-monarch will escape punishment, since most of the alleged crimes were committed before his abdication.

The Spanish Congress has also so far voted against calls from some left-wing and small regional parties to set up a commission of inquiry to look into the origins of Juan Carlos`s offshore funds.

What should King Felipe do now?

According to recent polls, Spanish society has split in half on the question of whether to remain a monarchy.

Three days after the announcement of his father`s inheritance, King Felipe made a televised address to compatriots about the coronavirus pandemic without mentioning his family shame, while some Spaniards took to balconies to clink their pots of outrage at the behavior. royal family.

In the past few weeks, the Spanish royal court has refused to comment in any way on the revelations surrounding Juan Carlos` personal life.

However, reports that the former king and his assistants were delivering millions of euros to the royal residence of Zarzuela near Madrid, as well as the revelations on the tape of Sain-Wittgenstein that the former king paid all the family`s expenses from his offshore funds in cash, will do little to his son. distance from the sins of the father.

Some believe that Felipe should completely do away with the past and start from scratch.

Prime Minister Pedro Sánchez recently admitted that the charges against Juan Carlos are upsetting and that he is in favor of constitutional changes regarding the absolute immunity enjoyed by the Spanish head of state.

According to a staunch supporter of the Spanish monarchy, former editor of the royalist ABC newspaper José Antonio Zarzalejos, King Felipe must take further steps to secure his throne, including the "physical expulsion" of Juan Carlos from Zarzuela`s palace.

"Felipe must give the Spanish people an exhaustive explanation, and also consider the need to draw up a declaration of income - the way elected politicians do," says Zarzalejosa. 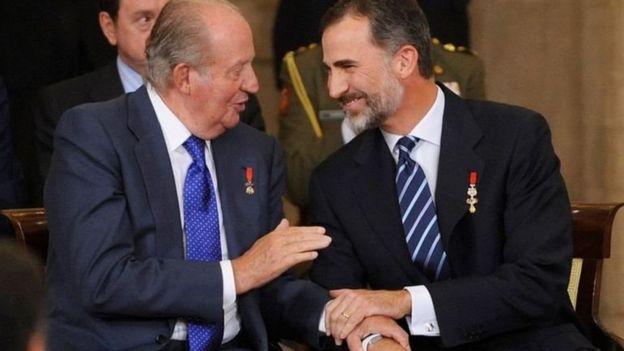 Image: Getty Images / Will King Felipe (right) be able to distance himself from his father`s actions?